1. As the city council begins what could—could—be the final round of discussions about the Mandatory Housing Affordability proposal (the plan, in the works for two years now, would upzone 6 percent of the city’s exclusive single-family areas and require developers to fund new affordable housing), density opponents are sharpening their pencils.

The Seattle Coalition for Affordability, Livability, and Equity (SCALE), which blocked the plan for a year with environmental appeals, produced a list of proposed amendments to the plan that would effectively gut the proposal, by forcing the city to charge developers to pay new “impact fees” to offset the perceived negative impacts of new housing, instituting minimum parking requirements for new developments, quadrupling the fees developers would pay toward affordable housing under the ordinance, and rolling back many of the zoning changes entirely.

The proposed amendments include things like increasing tree canopy requirements (thereby reducing development capacity) in low-income neighborhoods; changing the definition of “family-sized” housing to exclude two-bedroom apartments; requiring large open spaces or even yards for new multifamily developments; and reducing the MHA rezones to reflect the affordable housing targets in existing neighborhood plans, which did not contemplate the massive population growth nor the rise in inequality that Seattle has experienced over the last ten years.

SCALE’s Toby Thaler, who argued the group’s case against MHA before the city hearing examiner, did not respond to an email with questions about the document. While some of the amendments the group is proposing are obviously fanciful—no one is seriously talking, for example, about blowing up the “Grand Bargain” with developers by requiring them to fulfill 50 percent of their affordability requirements with on-site housing—they could serve as a kind of Overton window (or, if you prefer, opening gambit) for the upcoming discussion about neighborhood-specific changes to the plan, which begins next week.

Housing advocates will want to keep an eye out for what citywide and block-by-block changes council members (and Mayor Jenny Durkan) propose, and whether those changes track with the proposals put forward by SCALE. (The amendments aren’t available yet, but I’ll post about them as soon as they are.) Durkan has said in the past that she believes “neighborhoods” should have more input into the city’s development decisions; whether that means acceding to homeowner advocates’ demands during the final stretch of the MHA debate will become clear in the coming weeks.

2. The city will spend $75,000 this year (of $100,000 allocated in last year’s budget) on a contractor who will advise the mayor and council on whether the Showbox should become a permanent part of the Pike Place Market Historical District. According to the scope of work for the contract, obtained through a public records request, the contractor will “Review the historic significance of the Showbox theater, study the relationship between the Showbox theater and the Pike Place Market, consider amendments to the PPMHD Design Guidelines related to the Showbox theater, draft legislation, conduct outreach to stakeholders, and conduct State Environmental Policy Act (SEPA) review on permanent expansion of the Historical District, as appropriate.” According to a spokeswoman with the city’s Department of Neighborhoods, DON has not chosen a consultant yet, but remains on the schedule outlined in the work plan.

The contractor will have to get all that work done quickly; the city’s schedule calls for any SEPA findings to be published in March, with all the work wrapping up in April, and a council vote to permanently expand the historical district in June. Two to three months is a remarkably short time frame for a single contractor to conduct a full public outreach process, do a thorough environmental review, and draft legislation for the council to consider and pass. To put this timeline in historical context, the Market Historical District has been expanded twice before: Once, in 1986, to include Victor Steinbrueck Park, and again in 1989, to add a parking garage and senior housing. Seattle Times archives show that the debate over the latter addition lasted more than three years, and archival records at the city clerk’s office show that the council was receiving letters on the draft legislation fully nine months before they adopted the expansion.

Under the city’s current schedule, the Showbox building would become a permanent part of Pike Place Market three months before a trial is scheduled to begin in a lawsuit the property owners filed against the city; that suit charges that the city violated the Appearance of Fairness Doctrine, which requires council members to remain neutral on so-called quasi-judicial decisions like historic district boundary expansions, as well as the owners’ First Amendment and due process rights.

The debate over the Showbox’s fate began when a developer, Vancouver-based Onni, filed plans to build a 44-story apartment building on the property, which the council had recently rezoned to allow just such a development. The Showbox itself is owned by Anschutz Entertainment Group, and is a tenant in the building, which is owned by strip club magnate Roger Forbes; AEG’s lease expires in 2021.

3. After pushback over the fact that its original “service area” was confined almost exclusively to  neighborhoods north of I-90 (including many north of the Ship Canal), Uber announced today that its JUMP bikes will be available in South and West Seattle. The company, which launched its bikesharing service in Seattle late last year, got some bad press last week when the Seattle Times reported that riders who left bikes outside the service area could be charged $25. (An Uber spokesman says the company has not imposed the fee on any riders.) Lime Bikes, Uber’s competitor, launched citywide in the summer of 2017.

The red outline on this map shows the new service area, which includes three of four “equity areas” (low-income communities and communities of color) designated by the city. The original, blue-outlined area included just one of the equity areas, which includes the Central District and a sliver of South Seattle that extends down to the Mount Baker light rail station. 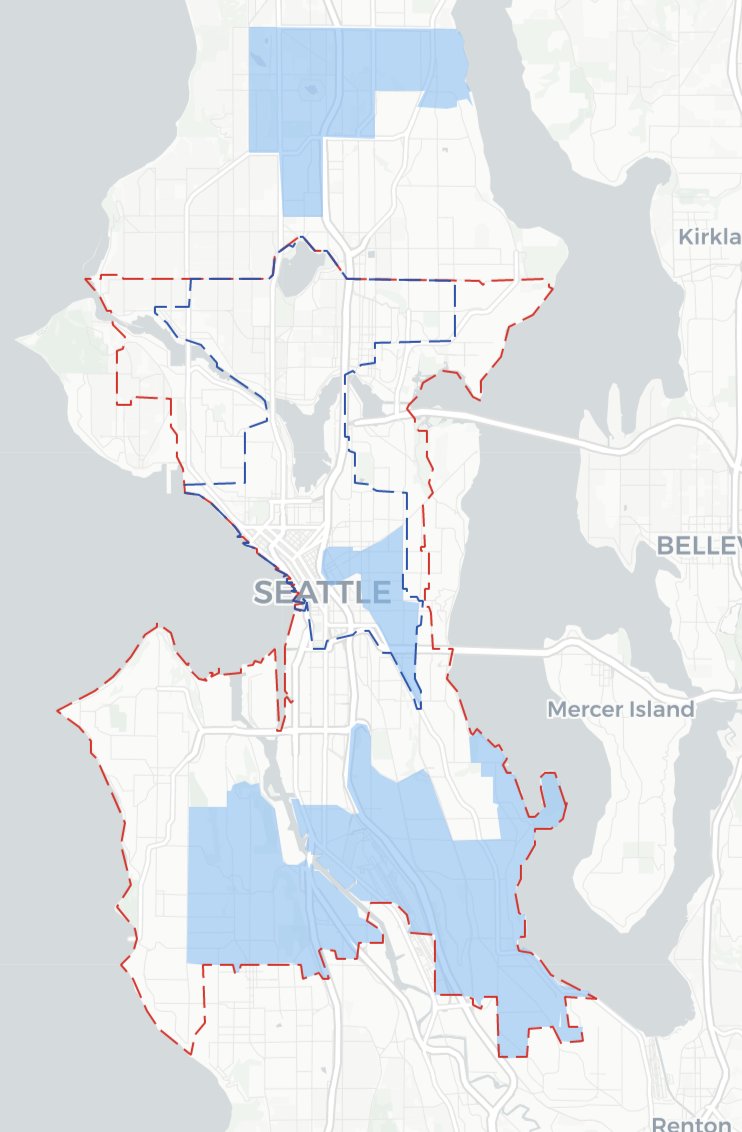 This is hardly the first time a “sharing economy” company has decided to serve the wealthier, whiter areas of the city first. Six years ago, Car2Go launched with a service area that excluded the entire South End and West Seattle while serving areas as far north as Bitter Lake.