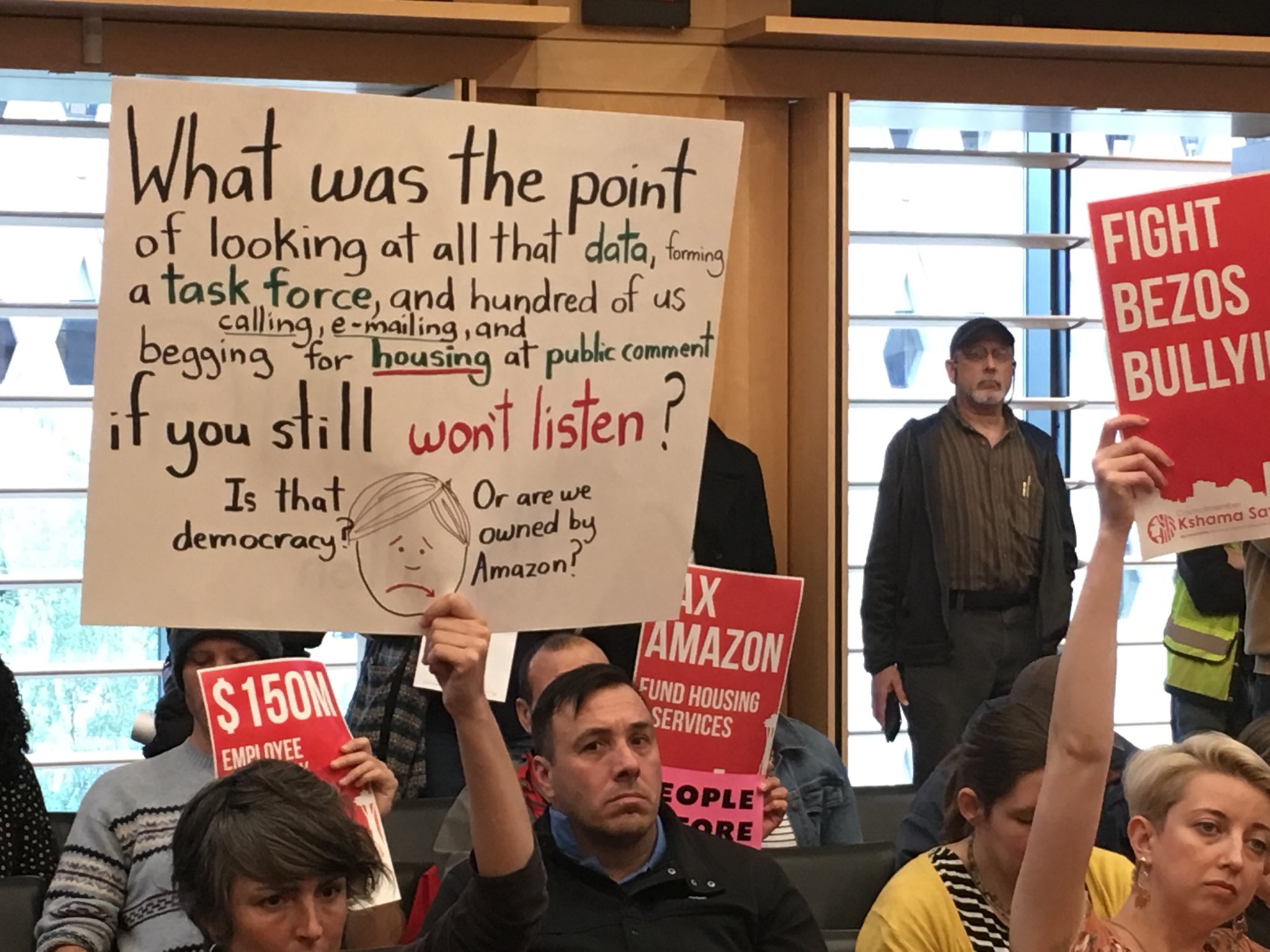 With the city council poised to pass a proposed $500-per-employee “head tax” on Seattle’s 600 largest businesses, and Mayor Jenny Durkan equally prepared to veto the proposal in its current form, the question now is: What’s next?

With council members heading into a weekend of negotiations, it’s possible that both sides could emerge on Monday with a compromise solution that splits the difference between the tax that passed on Friday and the “compromise” version that Durkan and council president Bruce Harrell support, which would cut the council’s proposal in half. However, if the two sides fail to reach a compromise, the larger version of the head tax will almost certainly pass on Monday by a 5-4 majority, which is one vote shy of the 6-3 margin supporters need to override a mayoral veto.

In a statement Friday afternoon, Durkan made it clear that she would veto the tax in its current form, but said she still held out hope that the council “will pass a bill that I can sign.” However, Durkan’s ally Harrell, also made it clear on Friday that he would not support a compromise floated by council member Lisa Herbold to lower the tax to $350 per employee, indicating that he and Durkan may not be open to a proposal that merely closes the gap between what Durkan and the council majority want. It’s possible, in other words, that when Durkan says “a bill that I can sign,” she merely means a bill that cuts the tax to $250 per employee—the amount Amazon, which has threatened to stop construction on its Seattle headquarters if the tax passes in its original form, has said they are willing to accept. Amazon contributed $350,000 to a pro-Durkan PAC in last year’s mayoral election.

A quick backgrounder on the tax: Last year, at the end of its annual budget process, the council formed a task force to come up with a progressive tax to pay for housing and services for Seattle’s homeless population. After several months of meetings, and numerous compromises in response to objections from small and low-margin businesses, the task force came up with a plan that would generate about $75 million a year—a $500-per-employee annual tax on businesses with gross revenues above $20 million, a threshold that excludes companies with high gross revenues but tight margins, such as restaurants. The proposal also came with a spending plan that emphasized long-term affordable housing over short-term emergency shelter services, and a provision that would convert the head tax into a business payroll tax starting in 2021, with no sunset date.

On Thursday night, Mayor Durkan released her own “compromise” head-tax proposal, which would cut the recommended head tax in half, to $250 per employee, ditch the provision transitioning the head tax into a business payroll tax, and sunset the whole thing in five years unless the council voted proactively to renew it. On Friday, Harrell introduced a proposal identical to the Durkan plan, along with a spending plan that emphasizes shelter over permanent housing and would pay for just 250 new rental units over five years. The Durkan/Harrell plan also includes a four percent wage increase for social service workers (many of whom make just over $15 an hour) and funding for a second Navigation Team to remove tent encampments and refer their residents to services.

When a council vote is 5 to 4 and a veto hangs in the balance, talk inevitably turns to “swing votes”—that is, who can be swayed to join the council majority to make the bill veto-proof?

Right now, it appears unlikely that anyone in the council’s four-person minority will budge over the weekend to support the full $500 tax, or even Lisa Herbold’s proffered $350 compromise, but a lot can change in the course of two days. So perhaps there will be a compromise that convinces one of the council members who opposes the larger tax to join the council majority. (The opposite scenario—that one of the five members who voted for the original $500 tax will join the four-member minority that wants to cut it in half—seems highly unlikely, since all five council members have consistently supported the proposal that came out of the task force, and since they stand to gain more, politically speaking, by forcing Durkan into a veto fight than by switching sides and handing the mayor a bloodless victory.)

However: If, as seems more likely as of Friday afternoon, the vote remains 5-4, the question becomes what will happen in the 30 days after Durkan vetoes it.

Judging from council members’ past positions and their comments Friday, the most likely “swing vote” when the decision comes down to passing something or doing nothing appears to be council member Rob Johnson, who seemed more tentative in his position than either Debora Juarez (“If we tax jobs to build houses and the jobs leave because of the tax, then no houses get built”) or Sally Bagshaw, who said virtually nothing at Friday’s meeting but is typically not the first council member to make dramatic vote switches.

Last year, when the council was debating whether to include the head tax in the budget, Johnson argued that proponents needed to come up with a more detailed spending plan to justify such a substantial tax. They did exactly that—and Johnson voted instead for a hastily sketched-out proposal that some council members didn’t see for the first time until this morning. On Friday, the most enthusiastic comment Johnson managed to muster about Durkan’s proposal was that it “allows for us to continue that pay-as-you-go process that has been a hallmark of most of the affordable housing investments that we’ve made as a city.”  If tax proponents are looking for a swing vote to help them override Durkan’s veto (and there is precedent for this kind of vote-switching), Johnson may be their best bet.

The council will be in discussions all this weekend, and will meet again on Monday morning to discuss the proposal (and any compromises reached over the next two days). A final vote on the head tax is scheduled for 2:00 Monday in council chambers.