The main thing I learned after schlepping up to Jane Addams Middle School and then back down to Southeast Seattle for (very informative and well-run) District 5 city council campaign forum on Monday is that I need better shoes if I’m going to be schlepping all around the city in this New Council Order. (This latest one involved a bus ride to Lake City, a rather epic urban hike, a ride to the U District, and a transfer in Southeast Seattle to get back home well after 10 at night).

But it wasn’t all solipsistic mental whining over first-world problems for this south-end girl. I also learned a few things that I’m not sure the candidates would have revealed if the questions were less pointed or the room more politically diverse.

In no particular order:

1) Virtually all the District 5 candidates, including those who’ve paid lip service to density in other venues, are hungry to win over anti-density homeowners.

Frontrunner Sandy Brown, for example (who told an earlier audience that he was “in favor of smart but green density” in urban villages), said his “primary response to density” was to ask, “Where is the design review commission? I’m pretty tired of seeing [buildings with five or six stories of residential over one story of retail] across Seattle, the same building materials with slightly different colors.” Brown said the city needs to adopt “stronger design review guidelines” determining how new buildings can look, and added that he doesn’t like city rules that mandate retail on the ground floor of low-rise buildings in dense urban areas.

Most of the other candidates (excluding Debadutta Dash, who said the city needs to grow “vertically, not sideways) piled on. Mercedes Elizalde said the city needs to build parking in “family neighborhoods” (as a childless degenerates, I object to being excluded!) and Kris Lethin made the Department of Planning and Development sounds like the Trilateral Commission, “saying, This is going to be where growth is going to be” instead of letting the city grow “naturally.”

2) Cognitive dissonance is strong with these candidates. Most of the eight had no problem saying they want to see lots more affordable housing in one breath, and saying that they also support higher taxes on all new development in the next. Halei Watkins, for example, said she supported mandatory one-for-one replacement for all demolished housing (a once-fringe idea that has become extremely popular among almost all candidates in all the races, at least until they’re actually elected and asked to implement it), but also agreed with policies, like the linkage fee, that discourage new development (especially in non-central areas) that could ease pressure on housing prices.

Brown, meanwhile, pointed out that many people were displaced with the demise of SROs (single-room occupancy hotels, which housed many single men until several decades ago), and said transit-oriented development could portend a similar mass displacement. “The problem with transit-oriented development along link Light rail is that we have the possibility of losing some of that low-income housing to build more market rate housing. There should be replacement housing … and mitigation fees.”

3) As some feared, district elections may be encouraging quantity over quality. At least two of the now-eight  Fifth District candidates entered at the last minute and seem unable to explain why they want the job. (“I heard they were asking people to run for council” is not a sufficient reason.) Kris Lethin is a former shoe salesman-turned-loan-officer who seems familiar (ish) with city issues but talked mostly about very specific details from his resume, while Hugh Russell, who works at North Seattle Community College, said he would “like to get involved with transportation” (a bit worrying, given that he also said the bus gets him from downtown to Northgate in five minutes) but really didn’t seem to know why he was on the stage.

4) There’s a right way and a wrong way to do rapid-fire, yes/no questions. Doing it the wrong way leads to mostly unanimous responses. Doing it the right way, as the three north-end groups that ran this forum mostly did, can actually illuminate how candidates feel about the issues. For example, when asked whether all new development should have to have parking so that people don’t have to walk further to their houses, only two candidates–Elizalde and Debora Juarez–said no. And when asked about rent control (not technically part of the lightning round, but a yes/no question), most candidates actually spurned simple answers and pointed out that rent control is currently illegal before suggesting other ways they would seek to impose price controls on housing.

5) Try as you might, you can’t candidate-forum and community-potluck your way to diversity. When an audience member asked the candidates how they would they would work to get diverse racial, ethnic, and cultural populations in North Seattle to “mingle and learn from each other,” their suggestions were pretty flat. Lethin suggesting holding dinners with “cultural theme[s],” while Watkins said vaguely that the city should do “proactive outreach” to diverse communities, and that building a new community gathering place (a big topic of conversation Monday night, as neighborhood activists are currently trying to win city funding for a new community center in Lake City) would not be enough on its own. “We can build it, but it doesn’t necessarily mean people are going to come,” Watkins said.

Elizalde had by far the most specific response to this question, suggesting festival streets, a new senior center, and greater city investment in the neighborhoods department so that neighborhood groups can more easily seek small grants from the city.

The problem couldn’t have been illustrated any better by the audience itself. 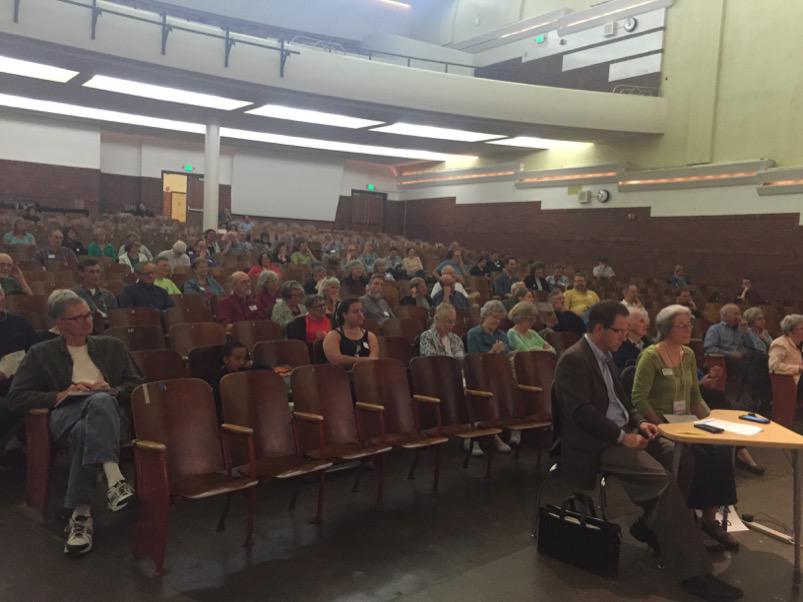 If there’s an upcoming forum in your community that I should know about, comment here or drop me a line at erica c barnett at gmail.

2 thoughts on “Five Things I Learned in the Fifth”